Welcome to The Film Library. Here you will find a collection of films that feature some of Leo Robin’s most famous songs.  Leo’s songs have been immortalized and preserved by Hollywood in these films. The films, themselves, contain some of the most memorable scores including Casbah, Dance of Life (aka Burlesque), Gentlemen Prefer Blondes, Gulliver’s Travels, Here Is My Heart, Innocents of Paris, Monte Carlo, The Big Broadcast of 1938, The Time, the Place and the Girl and Waikiki Wedding — 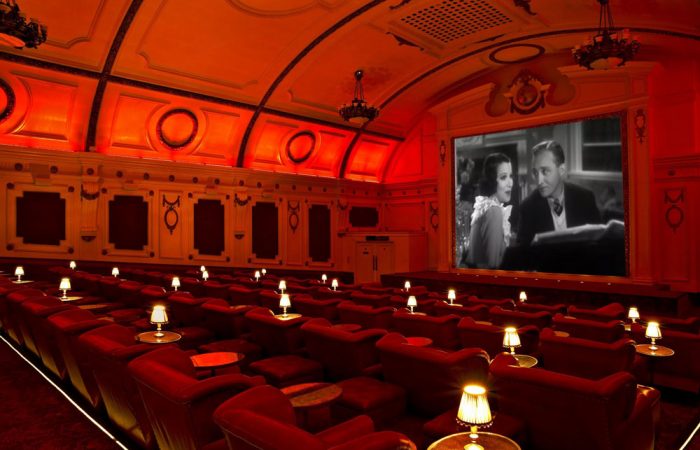 Bing Crosby had the good fortune to perform in many films that Leo wrote the lyrics for such as The Big Broadcast series, Here Is My Heart and Waikiki Wedding. The songs in these films provided him a pathway to a legendary career. When Bob Hope made his film debut in The Big Broadcast of 1938, and sang “Thanks for the Memory” with Shirley Ross it launched his career and gave him his theme song. For Marilyn Monroe it was the scene in Gentlemen Prefer Blondes where she (in this case, revamping Carol Channing’s already-famous stage version) sang “Diamonds Are a Girl’s Best Friend” and was skyrocketed to fame.

All in all, Leo Robin probably has more hit songs to his credit than almost any other songwriter in Hollywood.  Many of his songs first written for film have transcended their original vehicle and have become part of The Great American Songbook.

Welcome to the entrance of Easy Living Theatre, the quaint place where you can view films that feature some of Leo Robin’s greatest songs. The theatre’s name was inspired by “Easy Living,” written by Leo with music by Ralph Ringer. It was written for the Paramount film of the same name in 1937 and was the film’s only song. It was only performed instrumentally in the original film.

“Easy Living” since has become a jazz standard, made famous by Billie Holiday, Ella Fitzgerald and many other jazz and pop singers including Rosemary Clooney, Bobby Darin, Bill Evans, Norah Jones and the Andrea Motis & Joan Chamorro Group — just to name a handful. “Easy Living” has since been featured in many films including Paramount’s 1939 film Remember the Night, RKO’s 1949 film of the same name, Clint Eastwood’s 1995 critically acclaimed The Bridges of Madison County, and Todd Hayne’s 2015 Academy Award-nominee Carol.

Easy Living” is a jazz ballad with good feeling lyrics that express just how wonderful life can be when living for someone you love. In the spirit of Leo’s song, Easy Living Theatre will be the cozy place to view highlights from films that feature some of Leo Robin’s famous songs and performances by legendary stars. Make a choice from the following collection of films and just sit back, relax and enjoy the show.

Behind the Make Up

Dance of Life (aka Burlesque)

Give Me a Sailor

Here Is My Heart

Kiss and Make Up

Meet Me After the Show (aka Don't Fence Me In)

Moon Over Miami (aka Miami)

One Hour with You

Playboy of Paris (aka The Little Cafe)

Rhythm on the Range

Romance in the Dark

She Loves Me Not

Something in the Wind

That Lady in Ermine

The Devil Is a Woman

The Gang's All Here

The Girl in Pink Tights

The Rose of the Rancho

The Time, the Place and the Girl

Why Bring That Up?