Today on the birthday of Estelle Clark, the first wife of lyricist Leo Robin, we present this tribute to this legendary star. She was born on May 7, 1898 in Warsaw, Poland. On April 5, 1935. Leo Robin married this legendary actress from the silent film era, Estelle Clark, whom he and everyone in the family affectionately called ‘Clarkie.’ After nine years, they divorced on October 17, 1944. We learn more about this fascinating star and their marriage from a recent article in the publication HistMag, known as The First Historical Polish Portal.

This investigative article on How Estelle Clark conquered Hollywood is authored by Marek, a student of journalism at the University of Warsaw who graduated from High School VIII. King Władysław IV in Warsaw and interested in medieval and dynastic genealogy. With the research conducted by Marek, the article brings to light the extraordinary life of Clark including her rocky marriage with Leo Robin. We learn about how the music of Leo Robin influenced her and how she or their relationship influenced his music. After a thorough investigation into the life of Clark, Marek reveals insight into the marriage of this Hollywood couple.

Everyone can relate to a marriage where the spouses work or professions are affected by technological developments. In this case, they are married at a time during the transformation from the silent film era to the sound picture era that would impact both of their careers. They are in the same field, more or less; she is a famous actress of silent films in Hollywood and he is a rising star as a lyrist writing songs for films in Hollywood. With the advent of sound pictures, they would both face challenges, not just in each of their professional lives, but their marriage as well.

In this tribute to the life of Estelle Clark, a showcase is made of the enlightening article on How Estelle Clark conquered Hollywood by Marek published in the HistMag; a letter to the editor from Leo Robin Music; the favorite music of Clarkie from The Leo Robin Songbook and the music that may have been inspired by the marriage with Clarkie from The Leo Robin Songbook. We begin this exhibit with this revealing article. 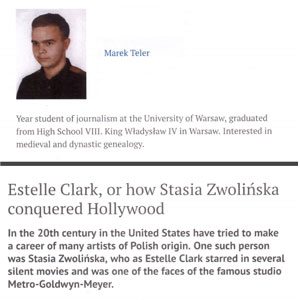 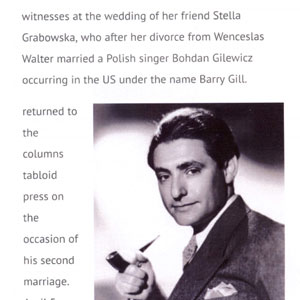 In the article, Marek noted that Leo Robin would win Clarkie’s heart with the wonderful lyrics of the song “Take a Lesson from the Lark.” This love song was written by the famous songwriting team of Leo Robin and Ralph Rainger and introduced in Shoot the Works, a 1934 American Pre-Code comedy film directed by Wesley Ruggles and starred Jack Oakie, Dorothy Dell and William Frawley. It is noteworthy that the film was released on June 29, 1934, by Paramount Pictures, preceding by three days the most rigorously enforced version of the Hollywood Production Code, which came into effect on July 1, 1934. Leo Robin and Estelle Clark would soon get married after the release of this film on April 5, 1935. In the article, Marek cites the lyrics and now you can hear them with Todd Rollins & His Orchestra with vocal by Chick Bullock performing “Take a Lesson from the Lark.”

Letter to the editor from Leo Robin Music

Following the publication of this story, Leo Robin Music responded with a letter to the editor/author to acknowledge the insightfulness of the article about the fascinating life of this legend. The revelations about the marriage of this famous Hollywood couple leaves wonderment of a marriage where the spouses find themselves on the opposite side of the emergence of the new medium of sound pictures and how they deal with the challenges. We now share this letter to the editor. 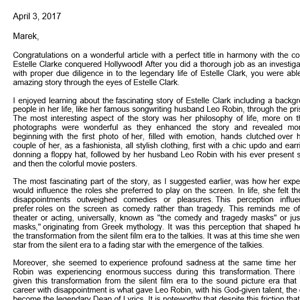 During the last year of their troubled marriage, lyricist Leo Robin was working with composer Harry Warren on the score for The Gang’s All Here, a 1943 musical film starring Alice Faye and Carmen Miranda. The film, directed and choreographed by Busby Berkeley, is considered a camp classic, and is noted for its use of musical numbers with fruit hats. The film was a great success with a splendid score with its release on December 24, 1943.

The torch song “No Love, No Nothin'” was introduced by Alice Faye in this camp yarn. Estelle Robin filed for a divorce in 1944 around the time her husband’s latest song, “No Love – No Nothing,” was a chart hit. The lyrics may have been inspired by the fate that Leo Robin was feeling in his discordant marriage. Soon after the release of the film and song hits emerging from the film Leo and Estelle Robin would be divorced on October 17, 1944.

The song went on to become a standard and was a favorite to cover by the great stars of the era including songstresses like Judy Garland, Rosemary Clooney and Diana Shore; Crooners such as Frank Sinatra, Nat King Cole and Perry Como; and Hollywood actresses the likes of Betty Grable, Marlene Dietrich and, of course, the debut by Alice Faye. For your enjoyment, here is the scene from The Gang’s All Here of Alice Faye singing sentimentally “No Love, No Nothin.'”