Leo Robin (1895-1984) stumbled onto his great songwriting career by accident. The oldest in a Pittsburgh family of six brothers and sisters, he worked as a newspaper reporter, a social worker and a writer of advertising copy to help support his family. In 1915, he went to law school at the University of Pittsburgh to please his father, Max, an insurance salesman and poet, who wanted him to become a lawyer and a judge. He wasn’t happy and left after one year. In 1916, he became a cub reporter for the Pittsburgh Chronicle-Telegraph where he wrote an “Advice to the Lovelorn” column, which he later said helped him with his love songs. 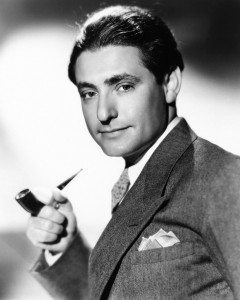 One night, he went to the theater and his whole life changed. He had a new ambition — to become a playwright. In 1917, he enrolled in night school at Carnegie Tech to study drama and eventually left his day job on the paper to become a social worker at Big Brothers, a progressive charity organization for ‘wayward young boys.’ He found that having them perform on stage was good therapy and he began writing little plays especially for them.

It was at this time that philanthropist and President of Blaw-Knox Steel, Alfred Lehmann, who was also on the Board of Big Brothers, saw the potential in Leo with his literary skills to fill a position and offered him a higher-wage job to write advertising copy for his steel mill. Leo, always restless, moved on to this new position and stayed there for several years. But he still wasn’t happy. The lure of Broadway had taken hold and he realized he had to go to New York to pursue his dream of writing for the theater or of becoming an actor or a director. He even moved to Greenwich Village.

A letter of introduction was sent from his drama professor at Carnegie Tech to playwright, director and fellow Pittsburgher George S. Kaufman. When Leo showed Kaufman some of his ‘little plays,’ Kaufman asked: “Is there anything else you can do?” Leo said, “Well, I’ve written some poetry.” Kaufman said, “Maybe you could write lyrics.” Leo used to joke that he didn’t know what Kaufman meant by ‘lyrics.’” “You know, words for songs,” Kaufman explained and sent Leo to producer and songwriter Lew Gensler.

Gensler advised Leo to become familiar with successful songs of the day and to practice, practice, practice. Leo followed his advice and sent song after song after song to Gensler. Eventually, Gensler was satisfied and showed Leo’s lyrics to Buddy DeSylva, with whom Gensler was working at the time, on a show, Queen High. Songwriter Buddy DeSylva was Leo’s idol and DeSylva offered him the chance to write a song with composer Richard Myers for The Greenwich Village Follies.

These little revues were very important in showcasing new talent and giving artists their start.  Leo and Richard Myers co-wrote “Whistle Away Your Blues,” which was used in the Follies of 1925 and was then published as sheet music in 1926. Soon after, Albert Von Tilzer, a well-known composer, who was also working with The Greenwich Village Follies, bumped into Leo and asked: “Are you working on anything new?” Leo reached into his pocket and pulled out the words for “My Cutie’s Due at Two-to-Two Today.” Von Tilzer said, “That’s cute” and became the composer for Leo’s first ‘big song.’

Then, Leo met the Gershwins who introduced him to Max Dreyfus, the head of Harms music, who signed Leo immediately. Soon, Max Dreyfus turned Leo’s attention to the Broadway stage and Leo, between the years of 1926 and 1928, worked on eight Broadway shows: By the Way (1925), The Merry World and Bubbling Over (1926), Judy, Hit the Deck, Allez-Oop!, and Just Fancy! (1927), and Hello Yourself (1928). The song, “Hallelujah!” from the smash hit, Hit the Deck (1927), with music by Vincent Youmans, was such an international success, that when Paramount asked Max Dreyfus to send them out a ‘hit-maker’ to work with Richard Whiting on Maurice Chevalier’s first American movie and Paramount’s first musical, Innocents of Paris, Dreyfus chose Leo.

Leo moved to Hollywood, and by the spring of 1929, Robin and Whiting had their first Hollywood hit with the love ballad, “Louise,” and Paramount had its first big songwriting team. Together, they wrote the songs for Marlene Dietrich’s first American film, Morocco (1930). Then came Monte Carlo (1930) with director Ernest Lubitsch’s famous train scene with Jeanette MacDonald singing “Beyond the Blue Horizon” to the blowing of the whistle and the rhythm of the wheels and, then, they wrote “My Ideal.”

In 1930, Leo met Ralph Rainger. They shared similar backgrounds and found each other by pure serendipity. They both had fathers who wanted them to be lawyers but eventually defied them and went on to become songwriters. They both started out in New York and found their way to Hollywood and each other. For over a decade, they were Paramount’s most successful songwriting team. They wrote hundreds of songs for a cavalcade of characters featured in a variety of diverse films, from Marlene Dietrich’s Helen Faraday, a cabaret singer, in Blonde Venus (1932) to five-year-old Shirley Temple’s Martha Jane in Little Miss Marker (1934), from Claudette Colbert’s Sally Trent in The Torch Singer (1933) to Jessica Dragonette’s Princess Glory of Lilliput in the animated version of Gulliver’s Travels (1939). 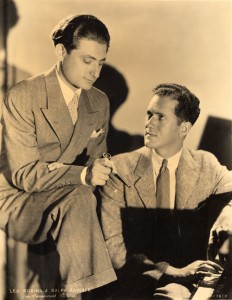 They also worked on many Bing Crosby movies which turned out some of their greatest songs like “Blue Hawaii,” “Here Lies Love,” “June in January,” “Love in Bloom,” “Please,”  and “With Every Breath I Take.” The Big Broadcast series (1932, 1935 and 1937) led to Bob Hope’s now-famous screen debut in The Big Broadcast movie (1938) featuring the Oscar-winning “Thanks for the Memory” which became Bob Hope’s theme song.  They wrote “Easy Living” for the film of the same name in 1937 and it was the film’s only song and was only performed instrumentally. “Easy Living” since has become a jazz standard, made famous by Billie Holiday, Ella Fitzgerald and many other jazz and pop singers.  Their final Paramount project was the fully-animated version of Gulliver’s Travels.

After Paramount, Leo and Ralph moved to Twentieth Century Fox, where they wrote songs for Betty Grable and Rita Hayworth. Sadly, their long successful partnership was about to come to an end – Rainger was in a fatal plane crash in 1942.  Leo stayed on at Fox alone for a few more years. He started writing again with old friends, like Harry Warren. They wrote the famous “Lady in the Tutti Frutti Hat” for Carmen Miranda and “Zing a Little Zong” for Bing Crosby.

By 1945, Leo was freelancing for every Hollywood studio producing musicals. He worked with many other composers including Jerome Kern, David Rose, Arthur Schwartz, Frederick Hollander, Harold Arlen and Nicolas Brodszky and produced some of his most memorable standards like “In Love in Vain,” “A Gal in Calico,” “A Rainy Night in Rio,” “Hooray for Love,” “It Was Written in the Stars,” and “For Every Man There’s a Woman.”

Leo Robin stands at the forefront as one of Hollywood’s most influential songwriters with his wonderful collection of songs in The Great American Songbook. His talent and intelligence can be felt on film through his lyrics that he wrote for a variety of characters from the dawning of the age of sound on the Silver Screen through Technicolor and Cinemascope during the Golden Age of Hollywood. “Thanks for the Memory” won, for the year that the American Society of Composers, Authors and Publishers (“ASCAP”) started offering this special honor, the ASCAP award for Most Performed Feature Film Standard. “Thanks for the Memory” was also recognized as one of the American Film Institute’s Top Movie Songs of All Time, and so, too, “Diamonds Are a Girl’s Best Friend.”

In 1948, Leo returned to Broadway and, with composer Jule Styne wrote the acclaimed lyrics for the smash hit, Gentlemen Prefer Blondes, the production which made a star out of the recent Bennington grad, Carol Channing. Just a few years later, Marilyn Monroe would reprise the role in the 1953 movie version. 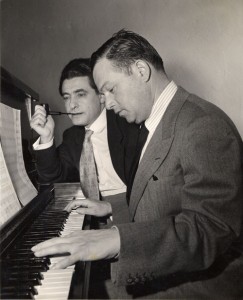 Leo’s career came full circle with his final film, My Sister Eileen (1955). It was a story, like his story, but instead of Pittsburgh, it was Ohio and instead of one young man, it was two young sisters who come to Greenwich Village to become artists. Again, Jule Styne wrote the music. It starred Betty Garrett, Janet Leigh, Jack Lemmon and Sammy Davis, Jr. Blake Edwards was the director and a very young Bob Fosse did the choreography.

In 1972, Leo was inducted into The Songwriter’s Hall of Fame. He came out of retirement for special occasions including the 1974 Broadway production of Lorelei, a sequel to Gentlemen Prefer Blondes, starring Carol Channing in the lead role of Lorelei Lee, which ran for 320 performances. In 1981, Frank Sinatra personally commissioned Leo to create an updated version of “Thanks for the Memory” for him to record on his new album, She Shot Me Down, and to perform on his live TV special, Bang Bang Baby She Shot Me Down.

In 1982, Leo was invited to New York to participate in An Evening with Leo Robin, as part of the Lyrics and Lyricists series at the 92nd Street Y, to celebrate his life and work. On stage were Arthur Schwartz, his old friend and collaborator, with whom he wrote “A Gal in Calico” along with his son, radio show host, Jonathan Schwartz, as well as Margaret Whiting, who made “My Ideal,” written by Leo and her father, Richard Whiting, her cabaret theme song. The New York Times reported, “The most affecting singing came from Mr. Robin himself. Clutching an ever-present pipe in his hand, he sang a jaunty, throaty version of ‘Love is Just around the Corner,’ a warm and husky treatment of ‘June in January,’ and, with grace and feeling, the song he sang to his wife at their wedding, ‘If I Should Lose You.’”