The Aftermath is a 2019 drama film directed by

James Kent and written by Joe Shrapnel and Anna Waterhouse, based on the 2013 novel of the same name by Rhidian Brook. It stars Keira Knightley, Alexander Skarsgård, Jason Clarke, and Alexander Scheer. The film was released in the United States on March 15, 2019, by Fox Searchlight Pictures, a subsidiary of Walt Disney Studios, a division of The Walt Disney Company. It had its world premiere at the Glasgow Film Festival on February 26, 2019.

The Aftermath is set in postwar Germany in 1946. 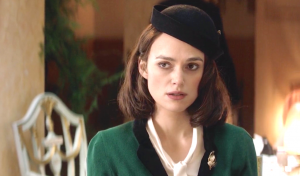 In the aftermath of World War II, a British colonel and his wife are assigned to live in Hamburg during the post-war reconstruction, but tensions arise with the German widower who previously owned the house and then lives with them. In a review appearing in The guardian, film critic Peter Bradshaw describes the setting of this period melodrama: “But this kind of wartime star-cross’d swoon is our modern film industry’s equivalent of France’s bygone cinéma de papa: a sclerotic classiness. It is a luxury period piece: cigarettes and antique automobiles, digitally rendered bomb devastation, menfolk variously dashing in uniform and evening dress and the women elegant and sexy, seen in gowns and various states of long-shot déshabillé, and all supposedly exalted by the postwar setting and its historical importance.”

In this period piece, there is a beautiful Steinway in the house and the music selection matches this place in time. The

Here is scene with the popular song “No Love, No Nothin'” performed by Ella Mae Morse.

Here is scene with the jazz song “Hi-Ya Love.”