In Matias Bombal’s Hollywood, the film critic reviewed Woody Allen’s Cafe Society, a story in the 1930s Hollywood. Matias Bombal eloquently states “There is a scene with Ralph Rainger and Leo Robin’s 1934 song “June in January” adding just the right support to finish the total effect of the moment. 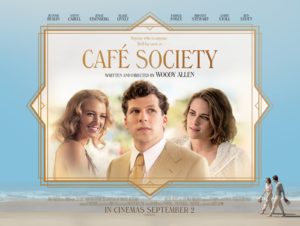 It occurs as Bobby gets to know Veronica one late evening in a jazz club in New York. The use of music by the director one of the most subtle and delightful aspects of Allen’s creativity in this and many other of his other movies. Often you will hear an instrumental, played under the dialog. If you know the tune and recall whilst watching the unheard lyric in the soundtrack, you will find exactly how Allen works magic with music in the movies. Invariably that unheard lyric directly ties in with the action on the screen, an added bonus that connects at that level for those who appreciate the music of the great American songbook.” For your enjoyment, here is Matias Bombal”s Hollywood review along with this wonderful scene: