In episode 13 of season 31 of the Fox hit show the Simpsons, entitled Frinkcoin, which aired on February 23, 2020, Homer hangs out with the Frink. In this episode, Professor Frink invents a cryptocurrency that makes him the richest man in Springfield, a title Mr. Burns has no intention of giving up.

The Simpsons is an animated sitcom created by Matt Groening for the Fox Broadcasting Company. The series is a 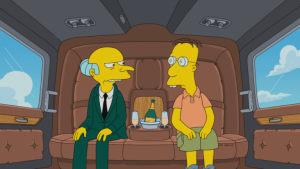 satirical depiction of working-class life, epitomized by the Simpson family, which consists of Homer, Marge, Bart, Lisa, and Maggie. The show is set in the fictional town of Springfield and parodies American culture and society, television, and the human condition.

In episode 11 of season 1, which aired on 15 April 1990, of the hit show the Simpsons, entitled The Crepes of Wrath, Bart is sent to France on a student exchange program, where he’s treated like a slave. As soon as he departs the plane, he starts singing the song “Louise.”