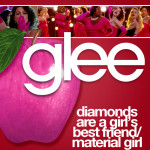 The Fox musical comedy-drama television series Glee has become a bona fide cultural phenomenon since its debut. Glee is a musical comedy about a group of ambitious and talented young adults in search of strength, acceptance and, ultimately, their voice. The top-rated Fox show featured the New Directions glee club at a fictional high school in Ohio. Over six years the series has followed a dynamic group of high school students from the halls of McKinley to the mean streets of New York City, as they embarked on life after high school. 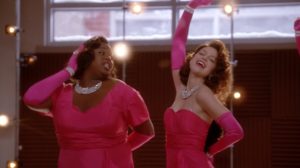 A memorable episode, the fifteenth, known as Girls (and Boys) on Film, during Season Four on the hit television show Glee features “Diamonds Are a Girl’s Best Friend,” originally made famous by 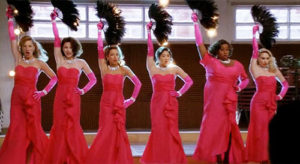 Marilyn Monroe in 1953’s Gentlemen Prefer Blondes, with a clever injection of Madonna’s “Material Girl.” The New Directions Girls, from the Glee Club, sing and dance to the songs with Marley and Unique leading, for the mash-up competition. They perform a unique routine with fans in their hands and their costumes are inspired by Marilyn Monroe’s pink dress and diamond necklace.
The New Direction girls perform well in the competition and everyone is impressed by the performance. Alex Newell considers this as his favorite glee cover he has done. This performance is replayed and dedicated to the legions of “Glee” fans who enjoyed the original airing of the episode on March 7, 2013 of “Diamonds Are a Girl’s Best Friend” and Madonna’s “Material Girl.”