The 92nd Street Y celebrated Songbook Classics By Unsung Lyricists on May 6, 7 and 8 of 2017. Many of the popular standards penned by songwriter Leo Robin were covered including “Diamonds Are a Girl’s Best Friend.” The evening was the latest Rob Fisher (An American in Paris) and Sheldon Harnick (Fiddler on the Roof) collaboration for The Lyrics and Lyricists Program presented by The 92nd Street Y. The Broadway talents who brought their words to life were Aaron C. Finley (Kinky Boots) Judy Kuhn (Fun Home), Elizabeth Stanley (On the Town) and Sal Viviano (The Full Monty). The 92Y’s 5 piece “symphony orchestra” under the direction of Rob Fisher tastefully let those great lyrics be heard by the enthusiastic audience. Deborah Grace Winer is Lyrics & Lyricists series artistic director.

The show was exquisite with its mission to pay special tribute to all the great songwriters who went out to Hollywood and created some of the greatest songs ever written. Leo Robin moved from New York, where he was working on Broadway shows, to Hollywood, where he wrote some of the most memorable scores for films and became the Dean of Lyricists in Hollywood. The reason this revue was entitled Unsung Lyricists was to emphasize the irony of this phenomenon. That these ‘unsung’ lyricists have written some of the most well-known songs that exist in the Great American Songbook. The show, in fact, started with the jazz ensemble playing a brilliant overture. 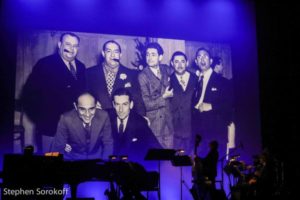 Then, Rob Fisher, the pianist and symphony director, stepped up to the microphone and mused aloud how whenever one hears these songs, one always has words swirling round in their heads, how the words are known by heart and the notes are inseparable from the words. “But who wrote these words?,” he asks. And then, not to let this question become rhetorical, answers, “Great lyricists all, who came out to Hollywood and worked for the big studios writing gems, that were first heard in movies, many of them now long forgotten.” At this point, the famous photo showing all of these influential lyricsts at the Trocadero Nightclub, appears on a screen. Then, the light comes up on Sheldon Harnick who notes that most of these men are smoking cigars, but never Leo. He says, “Leo always had his pipe. His ever present pipe — Always!”

Then begins an evening that takes the audience’s breath away and makes them audibly sigh with the pleasure of recognition. A medley of songs penned by Leo Robin that have become includable in The Great American Songbook were performed including “Thanks for the Memory,” “One Hour with You,” “Bye Bye, Baby,” “It Was Written in the Stars,” “Diamonds Are a Girl’s Best Friend” and “Beyond the Blue Horizon.” We understand what Rob Fisher meant by “long forgotten” but this is not the case for the music of Leo Robin.

With the lyrics penned by Leo Robin, we do remember these songs being introduced 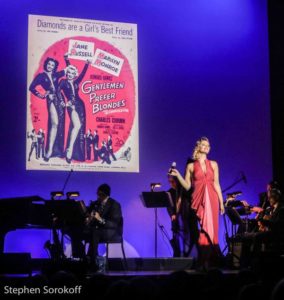 on The Silver Screen including the film, the star and the set. We remember the memorable scenes including the iconic scenes by Marilyn Monroe singing “Diamonds Are a Girl’s Best Friend” and “Bye Bye, Baby” in Gentlemen Prefer Blondes, the famous scene of Bob Hope and Shirley Ross nostalgia singing “Thanks for the Memory” in The Big Broadcast of 1938, Maurice Chevalier singing, in his signature style, “One Hour with You” in the film of the same name, Tony Martin crooning “It Was Written in the Stars” in Casbah and the famous train scene with Jeanette MacDonald singing “Beyond the Blue Horizon” to the blowing of the whistle and the rhythm of the wheels in Monte Carlo. All of these special moments can be seen in our Easy Living Theatre on the website. For your enjoyment, here is Tony Martin crooning “It Was Written in the Stars” in Casbah.