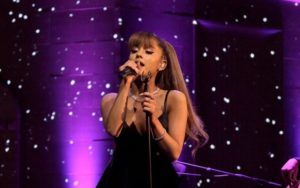 Ariana Grande was the entertainment at Tiffany & Co.’s party to celebrate its renovated Beverly Hills store on the night of Thursday, October 13, 2016. Reese Witherspoon, Jennifer Garner, Kate Hudson, Halle Berry, and more watched her perform some tracks from Dangerous Woman, and then the most appropriate throwback track: “Diamonds Are a Girl’s Best Friend,” made iconic by Marilyn Monroe from Gentlemen Prefer Blondes in 1953. Ariana shared the special moment on Instagram. “Because what else do you sing when you’re singin at @tiffanyandco ?,” Grande put it simply on Instagram. For your enjoyment, here is Ariana’s marvelous jazz version of “Diamonds Are a Girl’s Best Friend” at Tiffany & Co.’s party.

Ariana Grande is gearing up for her Dangerous Woman tour, kicking it off on Feb. 2 in Phoenix, Arizona, the show will wind its way through North America, wrapping on April 15 in Orlando, Florida, her home state. Ariana posted a few videos of what seems to be a jam session to the new Dangerous Woman Tour Instagram account. Though the set list will include some of your favorite Ari tracks, it seems that she’ll also be offering a classic song from the Leo Robin Songbook too. The track they were rehearsing? “Diamonds Are a Girl’s Best Friend,” the track made famous by Marilyn Monroe in Gentlemen Prefer Blondes. Though Ari has donned a platinum wig from time to time, we love you just the way you are with your brunette locks. We love this jazz version and here is the acoustic, guitar-driven recording from the Jam session.

Sunday, June 26, 2016 Happy Birthday to sitcom-star-turned pop music sensation Ariana Grande! Today, we celebrate this pop star who is an actress, singer and dancer and who rose to fame for her role as Cat Valentine on Nickelodeon’s Victorious. The songstress then rose to music stardom with numerous hit songs including “Problem,” “Bang Bang” and “Love Me Harder.” Grande took her love for movies to the stage by performing her sultry, new song “Dangerous Woman” at the MTV Movie Awards by channeling her inner Marilyn Monroe. She paid tribute to Monroe’s famous pink dress and diamond necklace look in the film Gentlemen Prefer Blondes where she sang “Diamonds are a Girl’s Best Friend,” the iconic song penned by Leo Robin. For your enjoyment, here is a magical musical moment of Grande channeling her inner Marilyn Monroe.

Sunday, June 26, 2016 Happy Birthday to sitcom-star-turned pop music sensation Ariana Grande! Today, we celebrate this pop star who is an actress, singer and dancer. This superstar has become known for her great musical impressions by singing female artists including Rihanna, Shakira, and Celine Dion. In a Saturday Night Live sketch, Grande who hosted the show, did get to perform some great impressions but her great Judy Garland act was actually cut from Saturday Night Live show. It’s too bad this sketch wasn’t included because she really did a spot on impression of the iconic Judy Garland. The songs in this Judy Garland sketch, known as Up We Go In Our Fantastic Rocket are reminiscent of the songs penned by Songwriter Leo Robin with lyrics about romance, journeys, rockets and stars that Judy Garland recorded including “Beyond the Blue Horizon,” “Hooray for Love,” and “Journey to a Star” — just to name a few. While this hilarious Judy Garland impression unfortunately didn’t make it to air, we have it here for your enjoyment — a magical musical moment of Ariana Grande channeling her inner Judy Garland.